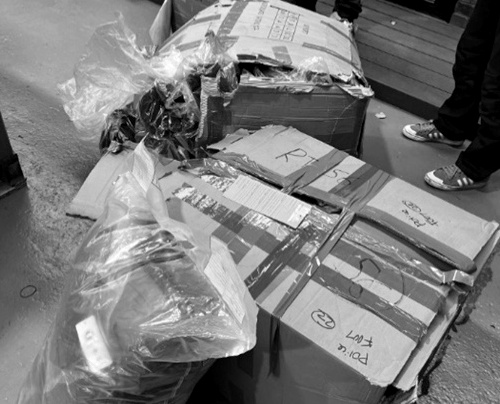 NOTE: a picture taken during the warehouse visit.

Counterfeiting is a serious problem. According to IACC, over 3.3% of all global trade is in counterfeit goods, with £13.6 billion of those imported directly into the UK yearly.  In 2021, the UK law enforcement authorities carried out the largest anti-counterfeiting raiding action in the UK, Operation Genoa, where they seized over 200 tons of counterfeits. On behalf of our clients, Stobbs played a key role in this operation.

In February 2022, Stobbs was notified of this operation, the largest UK seizure of counterfeit goods from 55 storage facilities in Strangeways, Manchester. The area where the raids were carried out, Cheetham Hill in Manchester, has been noted by international anti-counterfeiting agencies including IACC as the “notorious market” for selling counterfeits and received the nickname of the “fake capital of the United Kingdom”. BBC News also commented, “Amongst law enforcement, right-holders and in the media, Cheetham Hill is likewise anecdotally referred to as ‘Counterfeit Street’”. This operation was led by multiple law enforcement agencies, including the newly established North West Police Intellectual Property Crime Unit, the City of London Police Intellectual Property Crime Unit (PIPCU), Trading Standards, Border Force and Immigration Enforcement. An estimated £500 million worth of counterfeit goods were seized in this operation. Two people were arrested and multiple links were found to two of the biggest organised crime groups in Cheetham Hill. As is commonly seen in anti-counterfeiting operations, a large number of brands were targeted by the counterfeiters including Nike, Louis Vuitton, Channel, etc.

This was indeed a victory against counterfeiting. The operation has received significant public exposure from mainstream news agencies, including Daily Mail, BBC and Sky News.

On behalf of our clients, Stobbs attended a warehouse in Birmingham on 18th February 2022 to review the seized counterfeit goods. As requested by the Trading Standards, Stobbs inspected over 20 seized items which were selected as samples of over 300 items seized in this operation. We prepared and submitted witness statements to confirm the authenticity of the seized items to support the Trading Standards’ criminal proceedings so that those criminals could be prosecuted. This experience helped us build great relationships with the local law enforcement and demonstrated how collaboration can help fight against intellectual property crime.

This is not the first time that Stobbs has ever been involved in working with UK law enforcement agencies to fight against fakes. As one of the world’s leading brand advisory firms, Stobbs represents a wide range of brands which could be the targets of counterfeiters. As a result, we have been constantly assisting UK law enforcement agencies in protecting our clients’ interests and therefore built a long-term relationship with UK front-line law enforcement authorities and anti-counterfeiting agencies such as ACG (Anti-Counterfeiting Group). This has in return benefited us and our clients that the UK front-line enforcement officers actively look out for products infringing our clients’ IP rights and have made significant contributions to our clients’ brand protection.

Counterfeiting is a serious crime. If you have any questions about anti-counterfeiting and working with UK law enforcement agencies, please contact us at info@iamstobbs.com.